This week started with a literal BANG!

Lightning again struck my house here in Frisco, Texas. This is the second time. First time was Monday June 29, 2009. A little over 11 years ago. Search “lightning” (upper right corner) on this blog for more information. (Yes, this blog is much older than ten years.)

The bolt struck my nearly 20 year in-place vertical amateur radio antenna. Just outside the bedroom window. The vertical antenna is mounted above the lowest corner of the roofline on a 15-foot, two inch diameter heavy steel conduit pipe The antenna itself is about another 15 foot taller.

The top of the antenna is slightly taller than the metal vent chimney on my neighbor’s house and on my house. It was not struck directly in first strike a decade ago.

The antenna is direct current (DC) grounded to earth with 7 feet of the mast driven into the earth until it hit the underlaying Texas “Caliché” Limestone hard-rock,

RF (radio power) is coupled to the antenna through a DC isolating transformer at the base of the antenna. This provides isolation and DC voltage protection to the radio system from normal static-charge build-up..

But a direct lightning strike will travel where-ever it desires.

This strike exploded the isolation transformer at the base of the antenna and high voltage followed the feedline into my office / ham radio station area. It blew through an OPEN antenna disconnect safety switch and welded the contacts to the open/grounded position. (Jumping that air gap.)

It entered my radio transceiver through the antenna connection, exited out through the 12-volt power line to the separate (stand-alone) DC power supply.  The switch was off on the DC radio power supply but no problem for the lightning. High voltage passed out of the power supply on the 125-volt A/C power cord into an APC (brand) surge/lightning protector. All connection and all internal parts of both the transceiver and power supply were totally destroyed.

Only exposed fire evidence is a burn mark on the desktop where the strike left the radio DC power supply (burning out the line voltage cord plug and socket) and traveled to the surge arrester. 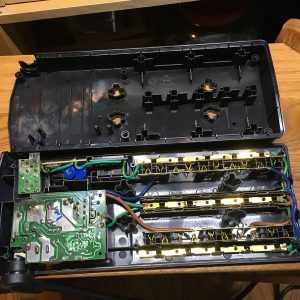 The Lighting then wreaked havoc with the internals of the surge protector. Arcing and burning components inside the APC (brand) unit. Then the far-reaching trouble started.

I had three identical APC (brand) surge arrestors and EVERYTHING powered in my office was plugged into one of the three. The protectors all had provision for plugging in telephone line, cable coax, and Cat5 LAN cables to provide protection for these lines. I, of course took advantage of this extra “protection”.

The lightning surge had a different plan. It followed these new and available conducting paths out of the APC “trap” it was in.

The power flowed through the attached cable TV coax and destroyed four Spectrum cable boxes, two large (50 and 32 inch) screen LED TV sets and two HDMI to TV signal converters on older TVs within my house. It also burned the connectors in the Spectrum system cable tap at the street and burned out several cable signal amplifiers on down my street. Very far reaching.

The power also followed a path on the attached telephone line destroying the hard-wired telephone base unit on my kitchen wall and killed its wall-plug power transformer. This failure tripped a breaker in my main electrical panel. (Four other breakers were also tripped from feed faults to other areas of the home.)

When connecting the phone wire going to my office wired phone set, I had passed the line through a phone surge arrester on an identical 2nd APC unit. That protector in that 2nd  APC (brand) unit failed in an open condition and my office base unit phone WAS NOT DAMAGED! The protector there did its job.

I have replaced all three (two failed, one uncertain) surge protectors with new APC (brand) units WITHOUT the extra wiring protection devices built in the same case. Replacement is always good practice when a surge protector is involved with a strike. Even if there is no visible damage.

One personal comment. The APC (brand) is owned by Schneider Electric. My last employer from whom I retired. I know the product well. I also have an APC (brand) Uninterruptible Power Supply (UPS) battery backup in this same office. It was not involved in the direct lighting path but on the same 120 volt house circuit. It was not damaged and I am certain protected the five 3D printers attached. The surge product pictured is not defective but obviously inadequate for a direct lighting strike and contributed additional paths for other extended damage.

We are not yet done. The attached LAN cables also carried the high voltage surge. Four desktop computer systems which included almost new Apple MAC-mini and Intel NUC, were wiped out as well as the two video monitors attached to them. The brand new $350 LinkSys WiFi LAN router/switch was destroyed as well as the two-terabyte NAS data storage drive attached to it. (and all its’ data.)

Good news, the two, one-TB solid state drives (SSD) on the MAC-mini survived. One contained a full “Time Machine” backup and fully restored the replacement MAC-mini. (I am using it to write this post.)

A fifth PC computer in the garage. Located less than a foot from the electrical breaker box, had not been powered on for several months It’s there as part of a CNC control system. When I inspected the breaker panel and reset the five tripped breakers, I heard what at first thought was water dripping. It wasn’t water. It was this turned off computer trying to start. It was making a pip…pip…pip…pip… sound trying to power up. Thus, it too was blasted by the surge back to the main panel.

Total five computers now totaled. I briefly tested the attached monitor and it turned on, but it’s too soon to tell if it has been damaged as well. Two more computers in the garage (used for CNC) were tested and they are fine. I think this is because the garage computers are linked to the full system by a WiFi repeater link. The one damaged is just too close to the main box. Same saving WiFi grace as a decade ago.  WiFi is a good lighting isolator/protector.

This is where I stand at this point. I have had to replace some of the damaged hardware to get back to being able to communicate by telephone, email and texting. Other than by handheld cell phone.

The insurance company considers this event minor in the scope of the major storm damage claims from hurricanes, tornadoes, and home and forest fires. I just need to file a list of damage items. No agent needs to inspect. There is a deductible amount of course.

I have empathy for the folks who suffer through total-loss events. I am almost overwhelmed by what was lost here, but this in no way compares to total loss of life and property due to fires and storms. In a way, it is a fairly minor and non-threatening event.

Something for which I can be thankful in an otherwise — period of anguish.

I will add some additional pictures when I find some spare time. Photos are transferring to my now on-line MAC-mini.