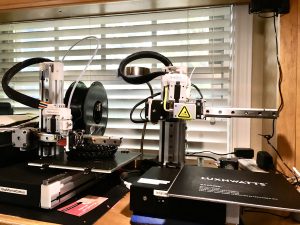 Thought I found all the lightning damage. Not so…

The newer printer on the left has a much higher wattage supply than the one that has failed on the right and a different plug. I had to order a new power supply for the right-hand printer as it was definitely dead, with zero output.

The replacement power supply came today all the way from China. When I powered it up on the printer, the familiar “magic smoke” odor was immediate obvious from within the 3D printer. The original power supply failed because something electronic was shorted out inside the printer. 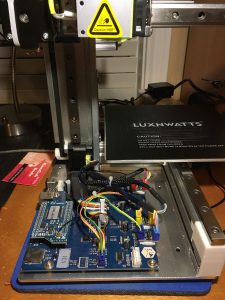 The second picture is the printer with the cover removed. The electronics and the new power supply are three quarters the cost of a full replacement. Just changing out the electronics doesn’t tell me until that is done if there is further damage elsewhere, such as to the four stepper motors.

It’s only a $250 printer (on sale), so best action is total replacement.

I filled out the insurance report and order a replacement printer. Same as the original It is stocked within the USA so delivery should be faster than the power supply.

I suspected there may be a problem in the printer, but no way to test without a 19 volt 6.32 amp power supply available. 19 volts seems to be the new “standard” replacing 12 Volt systems.

I am hoping this is the last of the hidden lightning victims. Replacing blown electronics is very depressing. Time for some good news and things that work.