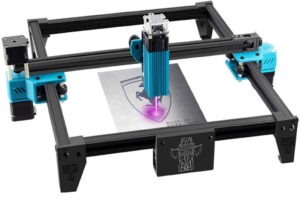 Working my way into a new creative hobby. I am a sucker for anything high technology. So LASER engraving and cutting is right in my “wanna do” bucket list.

I considered personal LASER machines many years ago. There were two big problems. First was the high cost and the second was finding some really good excuse for needing one as a hobbyist.

The hardware vendors back then were only interested in selling the high cost machines. It is still that way today. The “things LASERS could make” were as lame then, as they still are today. My favorite term is making “Junque” which is a high class spelling of junk.

The equipment vendors want to sell engraving machines and it is up to the customers to have access to things that can be engraved.

There are some good applications for the small  >1 | <40 watt LASERs and it’s not only about the engraving. The LASER is a tool, like a saw or a hammer. All the LASER engraving does is produce a burned in engraved feature to something that has already been produced by other means.

It’s like printing on paper without making the paper.

The LASER engraver is a CNC high accuracy burning tool.

Another example; A vase with flowers painted on the side is not (usually) bought or sold just because of the flowers. What is being offered is a vase decorated with flowers. It is the vase that is the primary attraction and the flower decoration adds value.

A LASER engraving does not stand alone. It must be applied to something of value. Engraved words on a plaque don’t exist if there is no plaque.

One must purchase the base item to be decorated or make it through use of other creative abilities. Then the LASER decoration can be applied to add decorative value.

That is how I see things when trying to justify when some one ask’s, “That’s nice, but what can you DO with your LASER?”

LASERS can be used as a material cutting tool. It is a very accurate cutting tool if one does not mind the burned edge. The LASER is again the tool.

So the first primary purpose is not “owning” a LASER. The intention is to produce something USING the LASER.

There is another side.

For some people, the machine “IS” the hobby. Building a machine and system from scratch. Adding improvements, Increasing performance. The low cost of todays diode type LASERs can provide a low cost entry point for the hobbyist hardware hacker. It did for me.

Yes, like “modding computers” or building amateur radio equipment. Playing with the hardware CAN be the hobby. Having a practical use is not the primary reason for ownership. The enthusiasm is the technical involvement of learning, “What makes it tick!”

For me it is a little  of both. Maybe a lot of both. I want to know the science and I want its use to be practical.

I built a personal Blog dedicated just to small diode <40 Watt LASER engravers. The link is in the left column of this site. KautzCraft LASER.

Join me there and we will eventually see where this all leads.