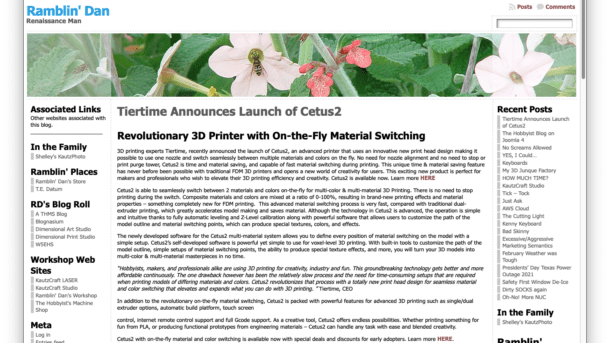 Out with the old and in with the new.

I started this blog 15 years ago and began using a WordPress template named Atahuapla. I had no idea what that name meant, but I liked the template as it has (had) a lot of custom configuration built in. Found out later Atahuapla was the last Inca Emperor during the times of the Spanish conquest. Actually killed in 1533, 479 years ago!

Maybe I should have paid more attention the the developer. He has thrown in the towel and cancelled all support and turned many things off. For some reason it broke my ability to make back-end tweaks such as editing the header picture. He must have put an Inca curse on present users websites, at least mine.

With the Inca Emperor pushing up maize, I had to quickly find a new WordPress template.

Seems no one is openly supporting two thin side columns*. So I worked on getting this new one (Blogstream) to pick up where Atahuapla expired. The format is different but it is kinda growing on me. At least for now.

Much has changed with templates as well as WordPress. The new display style is to use a lead photo that is separate from the text that I am now writing. Then the photo is displayed as a lead-in.  I like it but none of many hundreds of old post are composed in that fashion. All new ones will be.

Let me know what you think of the new Ramblin Dan!

* I believe this is because web sites are now user friendly to multiple size viewing screens. A huge overhead when multiple columns are present.