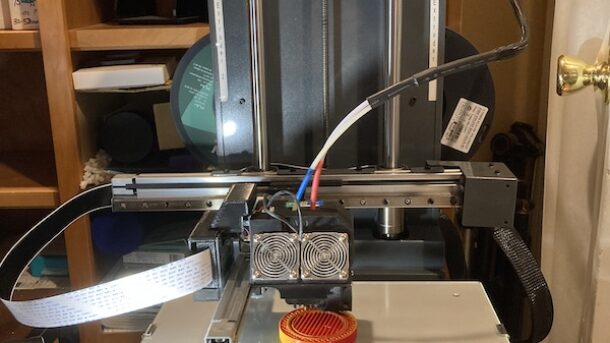 I won a 3D printer from a company in China named Tiertime. They make a number of 3D printer machines. I own three of their Cetus models. They are small with very little frills. Print quality is outstanding.

They are now working on a dual color single nozzle 3D printer they have named Cetus2. It’s at least twice the size in every dimension of the original Cetus, which means eight time the volume. Not the biggest printer made but it is as large as most users will need. (there are always exceptions.)

The Cetus2 is also an outstanding quality built and operational 3D printer. It has a totally new concept nozzle design which is still undergoing development.

I say “winner is…” because after they put the new Cetus2 in a Kickstarter campaign, they had a writing contest for best “New Years Wish” back in January 2022. They picked my contribution as best and sent me a pre-production Cetus2 with which I can play. Yowza!  Shoulda bought a lottery ticket too.

This is not a report about the printer. I cover that in many other blogs (HERE). I have also made several previous posts about the new Cetus2 printer here in RamblinDan.  This post is just a brag about my extreme good luck. Or was it talent for the New Year wish I wrote?  Oh well.

I am invested in the Kickstarter for the new Cetus2 printer. Hopefully it goes into production in May 2022. Kickstarter programs never claim a hard delivery date. Since the one I just received is a “prize” and sent to me free, I am sill on the books for another (production) version.

Do I need or want two Identical Cetus2 printers? The production unit will certainly be a bit different than the one I was sent. Probably a bit better? Nozzle design may be slightly different.

If anything major changes, I hope I can upgrade this first one. But it would have to be something major for that to be required. My pre-production Cetus2 is printing very well.

The weakest point about my prize, is the factory UPStudio3 slicer software. Full disclosure documentation of how all the setting variables function is fragmented. That’s the nice way to put it. The slicer has a lot of features but I am forced to experiment with print settings to see what works and how…

But, HEY! It’s a free printer! I can wait while the software documentation improves. I am making outstanding prints as I have admitted.

The lead picture is my “prize” in operation in my office. I am truly loving it in a hardware 3d Printer sort of way. Here is a link to go check out the Kickstarter. (Cetus2 Kickstarter) The link may break sometime after after the campaign ends,